As the former Outreach Director for Brightmoor Alliance, Joe worked with the Community Development Advocates of Detroit to lead the land use and quality of life planning process that resulted in the “Restore the ‘Moor” neighborhood-based framework. Joe also worked with Southwest Housing Solutions to coordinate a workforce development job training program with a special focus on deconstruction, weatherization, and landscaping.

Passionate about creating community-based solutions to address community-identified needs, Joe has assisted and launched several social enterprises, including Restorin’ E. Warren, a business and community association that recently acquired 75,000 sq ft of retail along E. Warren and is committed to facilitating continued growth along the E. Warren commercial corridor from Mack to Alter and assisted the Motor City Grounds Crew in the creation of the E. Warren Tool Library that provides much needed home repair resources, workshops, and equipment to support neighborhood projects.

Joe holds a Masters Degree in Community Development from the University of Detroit Mercy and lives in the East English Village Neighborhood with his wife Dana and their 2 dogs, Rosco and Rocket.

Darnell was raised in Ravendale and later Cornerstone Village, he earned a Bachelor of Science in Urban & Regional Planning from Michigan State before eventually returning to the city. Since then, Darnell has worked in a variety of organizations, developing his skills and the community around him.

Afterward, Darnell became involved with the Detroit Land Bank Authority (DLBA), first as a volunteer and eventually as the Director of Inventory Management. His leadership skills and passion for community development made Darnell an asset to the DLBA. He helped created new land disposition strategies focused on neighborhood stabilization. He intentionally partnered with community groups as well as the City of Detroit and was invaluable in matters regarding public space, managing and triaging nearly 95,000 publicly owned properties.

Darnell Adams joined Invest Detroit as the Vice President of Implementation of the Strategic Neighborhood Fund (SNF) in January 2019. In this role, Darnell will help implement projects supported by SNF that intends to make Detroit full of livable, walkable and vibrant neighborhoods.

A graduate of Cass Technical High School, she received a Bachelor of Science degree in communications and urban studies from Northwestern University as well as a Master of Planning degree and a Doctorate of Policy, Planning and Development from the University of Southern California. She currently serves as the Program Director of Workforce and Talent Initiatives for the United Way of Southeast Michigan. Alaina considers herself a champion for economic development projects that are place- and asset-based, and which grant her the opportunity to unravel complicated urban problems. She took these passions with her as she worked abroad exploring urban centers and historically marginalized communities while living and working in Mexico, Germany, Costa Rica and Brazil. These experiences challenged her to be more inclusive and creative in her problem solving. Her weekends are spent reading books or spending quality time with her husband.

Smart and incredibly humble about it, Jackie Grant is a dynamo in foreclosure prevention and blight remediation across Detroit. As Community Engagement/Researcher for Quicken Loans Community Investment, Jackie has surveyed thousands of parcels “at risk” of tax foreclosure and counseled countless residents in hopes of keeping them in their homes.

She also conducts research on leading nonprofit and community groups across the country to identify best practices for foreclosure prevention.​  Prior to this role she joining Loveland Technologies, Jackie established a prominent career in the fine dining and hospitality management industry in metropolitan Detroit and Boston. In 1994, she serendipitously became the owner of the beloved Money Tree, an upscale restaurant in downtown Detroit.

Hardworking as they come, she received a tremendous level of community support for her business until finally closing its doors in 2000.Jackie received her start in GIS back in 2013 when a neighbor shared information about the City of Detroit’s mapping initiative. As a resident of Detroit for almost 30 years and proud homeowner in Morningside, she always had a keen interest in housing policies affecting her neighborhood. She worked on several land surveying projects, including Data Driven Detroit and Motor City Mapping.These early experiences informed the ways in which Jackie empowers residents and strives toward a rebirth of our community today.

As the Courville Block Club President, she collaborated with neighboring block leaders, to receive thousands of grant dollars for revitalization projects. Jackie previously served on the MorningSide board as the 1st Vice President and as a Project Manager for MorningSide’s Vacant Lot Initiative. She currently volunteers at District 4’s Kitchen Cabinet and is a member of the Tax Foreclosure Work Group, a collaboration between the City of Detroit, Wayne County, several non-profits and Loveland Technologies.

Jackie enjoys reading history, observing the beautiful architecture of the Eastside, walking throughout her neighborhood, and spending time with her friends and neighbors. Her son David serves as the President of his block club on the North Eastside of Detroit. His artist group Detroit Lacquer is responsible for the many beautiful and vibrant public art pieces displayed throughout MorningSide. 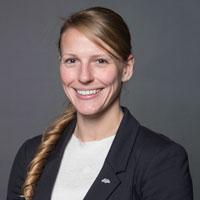 Heather Zygmontowicz graduated from Michigan State University with degrees in Political Theory and Accounting. She began her career as a CPA with PriceWaterhouse Coopers, specializing in utility audits and consulting, and eventually transitioned to work for the City – first heading up the operations department at the Detroit Land Bank Authority and most recently as the Director of the Bridging Neighborhoods Program for the City of Detroit. Although Heather’s career has had an intense focus on residential construction of late, she has continued to keep efficient process design and operational transparencies at the heart of her work. Heather lives in the Islandview neighborhood of Detroit and is on a mission with her dog, Ginny, to visit every park in the City by 2025.

Neighborhood community engagement and development is critical in the revitalization of Detroit and working to both support and sustain local small businesses is most important in this process. Larissa fully believes this to be true and it has in fact become her personal mission.

Larissa Richardson is the District Director for Congresswoman Rashida Tlaib.  Previously she has held the position of Director of Collaborative Workspace at TechTown Detroit supporting and managing TechTown’s coworking and event space. As Director, Larissa is charged with supporting the member-based entrepreneurial community within its facility and creating a memorable experience for clients and customers. Larissa leads a team of several individuals that help to connect and support entrepreneurs and small businesses find space that helps them work and grow.

Before this position Larissa served as the Economic Development Program Manager for Grandmont Rosedale Development Corporation, supporting small businesses and entrepreneurs in and around Grandmont Rosedale. She served as a connector for small businesses to resources and programs to help local entrepreneurs launch and grow their businesses. Larissa also helped to facilitate entrepreneurial training workshops and programs to provide access for businesses with the necessary tools and information they need for growth. In addition she helped to support and develop programming within the Grandmont Rosedale commercial corridors for promotional activities and events to help drive and increase consumer traffic for local businesses.

For over 5 years, Larissa has worked as a community developer and advocate for various mediums across the city of Detroit. She has served as a district manager for a local State Representative and currently manages several facilities for TechTown Detroit. Through her work Larissa has helped secure capital and technical assistance for many local small businesses and community organizations across the city.In 2017 and 2018 she was recognized by NEIdeas as a community ambassador for local businesses and by Comcast Business for her commitment and dedication to servicing small businesses. She has also been recognized in several local publications in Crain’s, The Detroit Hub, and Comcast Newsmaker for her engagement and work to support commercial revitalization in Grandmont Rosedale.

Larissa is also a board member for the Grandmont Community Association, Advisor Board Member for the Masters of Community Development Program at the University of Detroit Mercy and Board President for the Mary Turner Center for Advocacy.Larissa graduated with a Bachelor’s degree from the University of Michigan-Ann Arbor in Political Science and Urban Studies in 2012 and earned a Master’s degree in Community Development from the University of Detroit Mercy in 2014.Larissa currently lives within Grandmont Rosedale with her husband, Dante Richardson. Larissa spends a lot of her free time volunteering and supporting local grassroot organizations and programs.

Sean Riddell earned his Bachelor of Arts from the University of Michigan in Ann Arbor in 2009.  In order to support himself, he opened his first business when he was nineteen years old. After graduation, he worked in retail for four years before attending law school.

Earning his Juris Doctorate from Wayne State University Law School in Detroit in 2016.  During law school, he competed in the National Appellate Advocacy Competition as a member of the school’s Moot Court team.  He also drafted a note on the impact of the introduction of Form 1023-EZ on charitable organizations and their client populations as well as acted as the Symposium Director for the Journal of Law in Society.  Lastly, he was a competitor in both the Student Trial Advocacy Program and the Transactional Law Competition.

Sean received a number of awards during law school.  He was awarded the Ira J. Spoon Endowed Award of 2016, which was conferred for a paper  submitted outlining ways in which supporting black-owned businesses would foster productive urban development.  Sean was also awarded the Lincoln Brigade Veterans Scholarship, which is awarded to those with an active commitment to social justice.  Lastly, he was awarded the the National Lawyers Guild’s Outstanding Law Student Award in 2016.

During law school, Sean worked for a civil rights firm where he supported the partners in a major personal injury case against a defense contractor, as well as in constitutional claims, Americans with Disabilities Act claims, and habeas corpus petitions.  After law school, he worked for an attorney that represented employees in discrimination, whistleblower, and harassment claims.

Prior to opening his private practice, Sean worked for a legal aid organization.  While there, he specialized in prosecuting affirmative claims against landlords, defending against land contract forfeitures, defending against debt collection lawsuits, and assisting people with utility shut-offs.  In addition, Sean handled a significant number of divorce, custody, and personal protection cases as well as eviction defense cases. The fast-paced environment of legal aid provided him with the tools to run an efficient and effective practice without sacrificing my compassion for people going through some of the most stressful times in their lives.

Jermaine Ruffin is a 2017 graduate of the Masters of Urban and Regional Planning Program at Taubman College. Jermaine has held various positions in the fields of community and economic development on both the state and municipal level. He is currently the Director of Development for the West Region of the City of Detroit in the Public-Private Partnership Office. As Director of Development, he is responsible for the implementation of strategic neighborhood plans with specific focus on residential/commercial real estate revitalization and affordable housing options.

Jermaine currently serves as a Board Member for the Redevelopment Ready Communities program, as an Advisory Board Member for the Federal Home Loan Bank of Indianapolis, a current member and former Ambassador for the American Planning Assoc. (APA), former Housing Commissioner for the City of East Lansing and is an active member of several national and state community and economic development organizations. He lives in Detroit with his wife Letisia and is the proud father of Stephanie, Oscar and Arthur.

Marlin Hughes is the owner and operator of the Detroit Pepper Company which opened in November of 2019 is located at 17180 E. Warren Ave, in Cornerstone Village on Detroit’s Eastside.  Marlin’s business is known for its delicious stuffed peppers, and flavorful smoothies. He has won Motor City Match through the Detroit Economic Growth Corp, and has been featured on all major media platforms including Channel 2, 4 and 7 as well as being featured in many news publications who have all raved about his delicious products.